NationBuilder paths let you lead people to take specific actions (like going out to vote on election day) through a clearly defined series of steps. This article takes you through how you can use CallHub to achieve the actions required to move people along steps in a GOTV path on NationBuilder.

Before getting started, connect your nation to CallHub. (How?)

First, define your path for GOTV (How to create a path). I’m using a slightly modified version of the default GOTV path on NationBuilder. But you can tailor it to match the workflow of your campaign.

The steps to include for your GOTV path are:

The way to go about achieving the final goal (increase voter turnout) through the GOTV path is as follows:

1. Add your list of targeted voters to a path.

3. Run a phone banking campaign asking people to vote and to ask them about preferred voting method (‘Mail’, ‘Early voting’, or ‘Election day’).

4. Run a follow-up text bank based on the preferred voting method to remind people to vote. Offer a ride to the polls for everyone who is voting on election day.

5. Run a text campaign enquiring if people voted. Ask them to share there vote status on social media right then if they did.

Use the filter option in NationBuilder (People > Filter) to create lists of targeted voters.

Use the Batch Update option within your list (‘list name’ > batch update > paths) to add them to the first step of your GOTV path (Targeted voter).

1.1 Create your NationBuilder survey questions (make sure to add paths)

How to create a NationBuilder survey with paths

Step 1: Create a new NationBuilder survey (People > More > Surveys > +New Survey). When adding responses for a survey question you can see an ‘Add to path’ option. For each response, choose the appropriate ‘path’ and the adjoining ‘step’.

Tip: Set the survey status as ‘Hidden’ for each survey question since you’ll be using this survey with CallHub and not on your website.

Tip: Add a tag for each survey response to help you segment voters into targeted lists later on. eg. Tag people who choose ‘early voting’ with ‘early_voter’

How to create a NationBuilder survey?

Choose your website from the Dashboard and create a new Survey page. Add your created survey to the page in the ‘Survey Settings’ section.

Surveys, questions, and responses to be created and assigned

Survey Name: Follow-up
Question 1: Do you need a ride to the polls?
Response 1.1: Yes {Path: GOTV Step: Requested ride to poll}
Response 1.2: No

Question 2: Can you share that you voted through social media?
Response 2.1: Yes {Path: GOTV Step: Shared vote status}
Response 2.2: No

If you’ve already connected your nation to CallHub (How to connect?), simply refresh your integration to import you NationBuilder lists and surveys into CallHub.

3. Run a phone banking campaign asking people to vote and to ask them about preferred voting method (‘Mail’, ‘Early voting’, or ‘Election day’).

Automated dialers: Increases the pace of your calls which is essential to contact a large GOTV universe. Bear in mind that you cannot make calls to cell phones without an explicit opt-in. However, TCPA guidelines allow you to call landlines. How to set up an automated calling campaign.

Manual Dialling (Collective Calling): All the features of the automated dialer i.e surveys, contact information etc., except in this case your volunteers or staffers manually dial supporters from their phone while capturing data on the Collective Calling interface i.e. you can call cell phones. How to set up a manual calling campaign.

4. Run a follow-up text bank based on the preferred voting method to remind people to vote. Offer a ride to the polls for everyone who is voting on election day.

If you are short on volunteers, broadcasting texts are a great way to reach a large audience with minimal effort. But if you do have volunteers on hand, a peer to peer text messaging campaign can return the best results for your GOTV reminder campaign.

What is peer to peer texting (Collective Texting)? Peer-to-peer texting lets organizations send text messages to people with the help of volunteers. Each volunteer uses CallHub to send out a batch of texts and manages the responses. You can attach a survey to a campaign and have volunteers record information from a conversation, like if they’ll go out to vote, or will need a ride to the polls. How to set up a  peer to peer texting campaign. 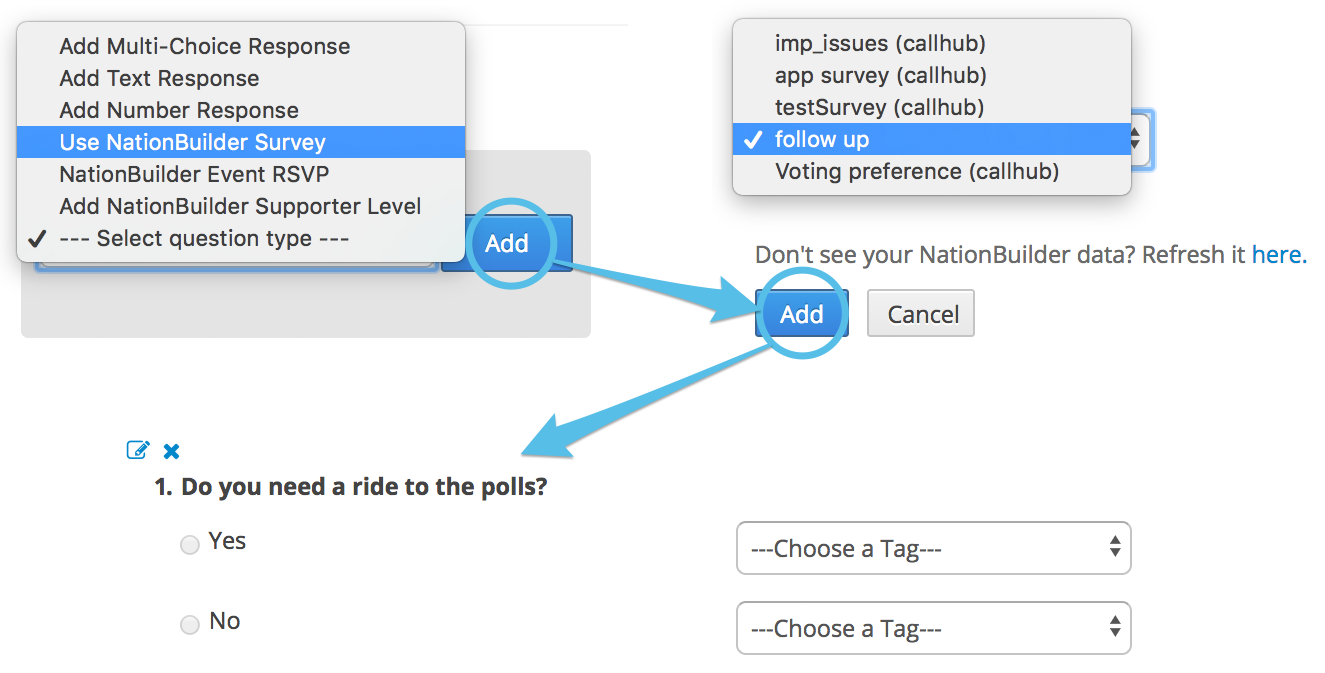 After you start the campaign your text banking agents converse with prospective voters over text — reminding them to vote and collecting information on who wants a ride to the polls.

After a reminder has been sent, the agent should tag each contact with the ‘reminder sent’ tag and fill in the survey response as ‘Yes’ or ‘No’ depending on whether they want a ride to the polls.

How to use tags?

The ‘reminder sent’ tag is instantly updated to your nation. Use it to batch update prospects to the ‘Reminded via text’ step in your GOTV path.

Prospects whose response is recorded as ‘Yes’ are automatically added to the ‘Requested ride to poll’ path. 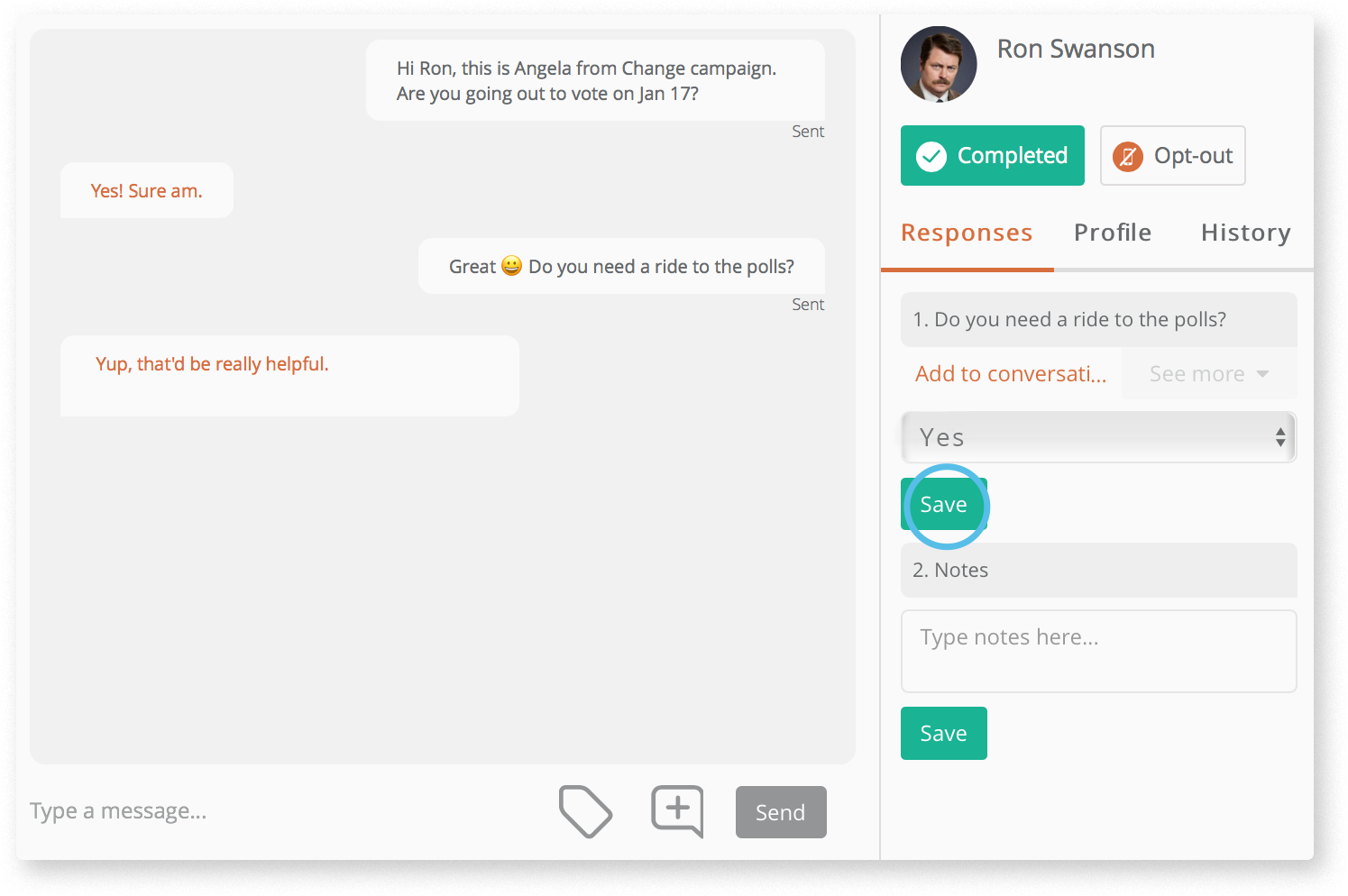 5. Run a text campaign enquiring if people voted. Ask them to share their vote status on social media right then if they did.

On election day, run another text banking campaign to confirm your votes at the poll. If you are using phone calls, you risk missing out on data from people who are yet to go out to vote. With texting, your text banking volunteers can keep conversing with voters throughout the day, encouraging them to vote and collecting voting information. Once a vote has been confirmed, encourage them to share the fact that they voted on social media. This helps your campaign use peer validation to gain more voters.

A few best practices to remember for your GOTV campaign:

■   Engage voters in conversations. People are more inclined to respond positively when they don’t feel like they’re having a script read to them.

■   Confirm every commitment. Avoid marking survey responses based on assumptions. If a voter agrees to share on social media, ask them to do it then and there, and then confirm the survey response.

■   Let people know that you’ll be contacting them after the election to survey them. This puts subtle pressure on the voter to follow through on their commitment.